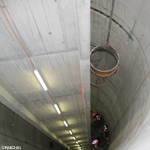 PASCHAL delivers elements for the construction of escape tunnel

With Austria’s accession to the European Union in 1995 and the expansion of the EU in 2004, the geopolitical situation in Vienna and its environs has changed considerably. Austria’s capital city is to be repositioned as a transportation hub in railway traffic within the framework of the establishment of Centrope, the European Region. 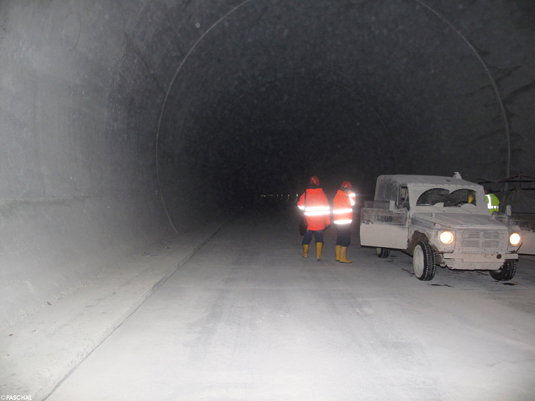 For the construction of the escape tunnel in the "Lainzer Tunnel" construction segment, 375 m² of Circular Trapezoidal Girder Formwork with steel face (TTS) were used.

In the course of this gigantic construction measure, PASCHAL from Steinach, the formwork specialist won the bid for the construction of the escape tunnel in the “Lainzer Tunnel” construction segment. All in all, 375 m² of Circular Trapezoidal Girder Formwork with steel face (TTS) were used. The waler line has been produced as a special project only for this construction site. For the elevator shaft, PASCHAL has delivered a total of 158 m² of Logo wall formwork with element sizes 270 and 135. During the construction of the security tunnel, the inner shell which has stairs all around had to be brought up together with the elevator shaft.
“PASCHAL was capable of delivering a system which met these demands,” said Albin Matchek, project foreman.
The three shafts - Markwardstiege, Himmelhof as well as Angermayergasse - with heights of 45 m, 75 m and 54 m respectively were enlarged from top to bottom to a diameter of 9 m. Subsequently, the circular formwork was placed in quarter circles. Several demanding factors played a role. “Therefore, we had to proceed with caution. Concreting was then done completely in each case”, the foreman explained. For each shaft, about 6630 tonnes of concrete were used. 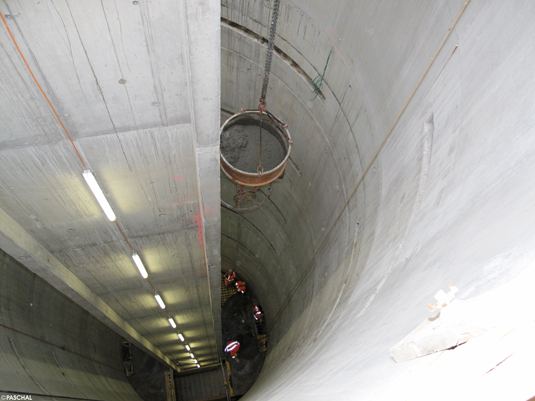 The three shafts - Markwardstiege, Himmelhof as well as Angermayergasse - with heights of 45 m, 75 m and 54 m respectively were enlarged from top to bottom to a diameter of 9 m.

The constructional feed was done in phases of 2.50 m. Matschek: “One could see that the usage of TTS was a good decision. During dismantling and forming, we did not need to do any reworking or readjustment on the elements. Even after being used about 140 times, no alteration of the formwork facing was necessary. This saved us a lot of labour costs.” Additionally, accuracy when dealing with projects of this height was also an important factor. A deviation of plus/minus 1 cm on a height of 75 m was simply remarkable. However, it is not just proper materials that are responsible for good results but also perfect planning. PASCHAL is also known for that. Nothing is left to chance and therefore, Roland Künstle, Engineer in the PASCHAL project team and Herbert Bliemetsrieder, PASCHAL Munich Branch Manager were at the construction site in Vienna prior to commencement of construction and they got an introduction to the construction sequence. According to materials accounting and the time specifications of those responsible, the formwork producer PASCHAL took over the commissioning of the materials as well as the handling of the logistic parts. Due to this absolutely good advance planning by the involved companies, there was no delay at the construction site. “The formwork was delivered completely and not even a screw was missing,” said Albin Matschek contentedly. In order to guarantee safe and proper set up of the formwork, a PASCHAL assembly man assisted in the setting up of the formwork at the construction site. “However, this was done only for the first shaft. We were shown how to set up the formwork and handling it is so simple that we were capable of constructing the other shafts ourselves,” says the foreman. Such cooperation only functions with experts and absolutely accurate planning. At this formwork construction site, we exclusively dealt with experts,” says Herbert Bliemetsrieder, Munich Branch Manager. “It was simply a 100 % match,” said Albin Matschek.