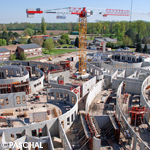 PASCHAL-Circular formwork for a patient wing with architectural sophistication

Convalescent hospital with round walls

The building’s symbol is a butterfly, reduced right down to its basic concentric elements, thereby approximating a series of cocoons or stylized wings.
These naturalistic, irregular circular shapes were also used as a template for the extraordinary architecture of a patient wing in the Hospital Erstein.
The patient should feel safe here and, once recovered, fly back to their life like a butterfly.
Before that can happen, however, there is the task of realizing this unusual architecture. 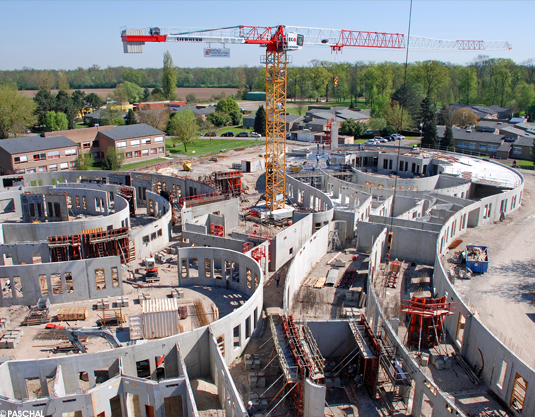 Most parts of the new hospital wing formwork are complete. The organic round shapes of the walls were created using adjustable radii TRAPEZOIDAL round formwork from PASCHAL.

The town of Erstein is located about 20 km south of the city of Strasbourg, just 5 km away from the river Rhine, in the countryside between fields and woodland. The Centre Hospitalier, founded in 1968, is located on the outskirts, and with 800 beds is one of the major specialist hospitals and a centre for psychiatric help.
A detached extension funded by the Alsatian Health Agency (Agence de santé régional d'Alsace, a sub-agency of the Ministry of Labour and Health) will create new capacity to accommodate patients. Architectural structures will be tailored to meet the patients’ needs.. This includes moving away from cell-like units and corners. Non-recurring, individual, round, light structures should be the main components. . The specification and realization of the plans were carried out in cooperation with

The supervision plan shows the three big curves that are assembled concentrically into several other shapes.

Eiffage Construction had a meeting with the representative of the PACHAL plant before the work preparation to work on the circuit diagrams. They have an excellent working relationship due to having cooperated successfully over the years. A considerable part of the formwork installation was able to be saved prior to the work starting. Skilful allocation meant that 40 different radii of curvature that should have been suspended in the formwork were reduced to only 16 without any noticeable deviations from the architect's plans. 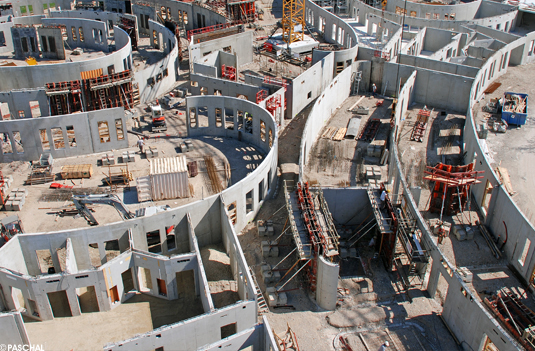 Labyrinth: The unfinished construction site looks like a confusing labyrinth.

The building does not discharge any particular load into the ground or penetrate it, so only flat, horizontally curved strip foundations were laid on the prepared ground. The circular formwork was placed on this prepared ground and the rounded walls were erected. After that the floor panels for the individual rooms were created.

The formwork system used was the radii adjustable TRAPEZOIDAL GIRDER circular formwork (TTR) from PASCHAL. It is particularly suitable for such applications. 8 sets of formwork were used.
The entire construction process was based on the formwork plan that was designed for maximum efficiency - a challenging, but very comprehensive concept. The rounded formwork was delivered to the construction site pre-rounded to even the smallest radius. All areas with the same radius were concreted now – at first it looked like a patchwork of individual rounded wall plates as those places rarely lay next to each other due to the architecture. However, the TTR was implemented quickly and easily by crane, with the TTR remaining fixed and stable and requiring no further adjustment. . After completion of each radius, a new radius was sent to the construction site. The PASCHAL technician was on site for the first stage and instructed the crew. This was initially unfamiliar, since a circular formwork is technically more complicated than a straight wall formwork, but in the end it worked perfectly. The TTR can be precisely adjusted within 1 centimetre to the extent required for each segment within the system; time-consuming on-site improvising and filling is not needed here! The numerous openings for windows, doors, etc also stand out. Thus the site grew like three unfolding flowers seen from above and revealed an intriguing aesthetic. 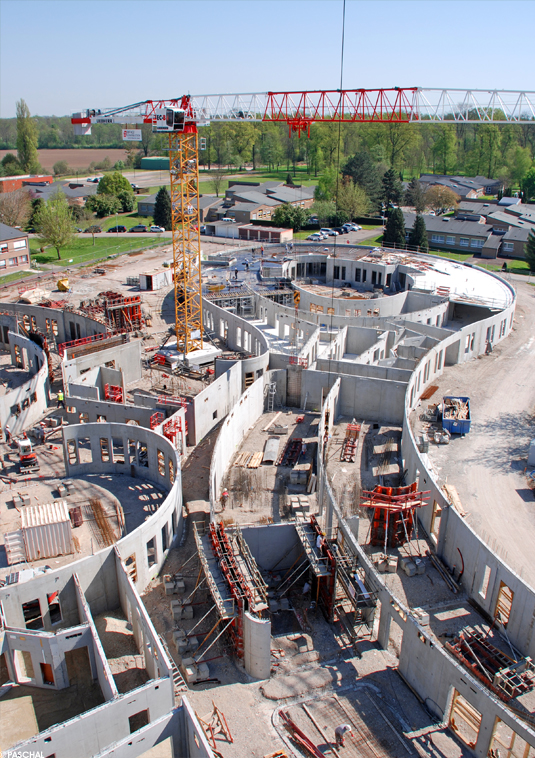 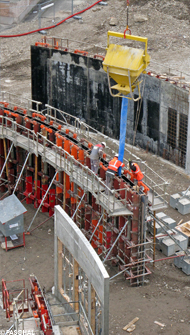 Concreting: Once the round formwork had created all the wall parts with an identical radius - which could be in different places on the site – then work moved on to the next largest radius in the formwork. This is much quicker than dismantling the formwork each time. Initially single wall panels not connected to other parts of the building could be seen on the site. 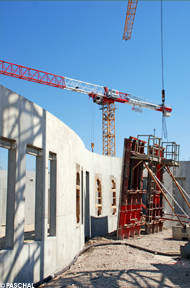 Stripping: After the concrete was set, the round formwork elements including supports and the MULTIP created a security platform. 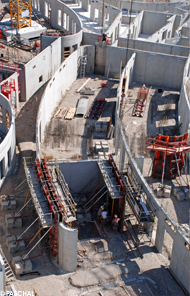 Round walls: The radii-adjustable trapezoidal round formwork system was the most suitable for this task. It can be adapted precisely to within 1 cm of the required amount. 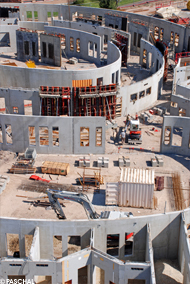