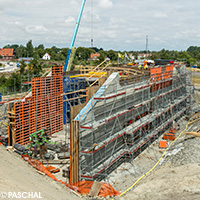 LOGO.3 from PASCHAL in use.

LOGO.3, the LOGO wall formwork with steel facing from PASCHAL-Danmark A/S was supplied for several sections of the European railway megaproject in Sweden.
The section of railway between Malmö and Lund is one of the most heavily used sections of track in the whole of Sweden. Approximately 460 trains and, in normal conditions, up to 60,000 people use this section of track every day. During rush hour, around 7,000 people are travelling by train every hour. Consequently, it is imperative to reduce emissions generated by new construction.

The construction contract is being carried out by NCC and OHL in the "Joint Venture NCC / OHL" consortium, and the companies are splitting the total contract value of approximately 800 million SEK.
NCC and OHL have been building the stretch of railway in a consortium and in collaboration with the Swedish transport authorities since 2017. The work has been planned meticulously and there is little room for unforeseen events.
Besides the track construction, new railway stations, platforms, flyovers and tunnels are also being built. But before the new construction can be started here, it is often necessary to demolish existing structural elements and structures.
Even for PASCHAL-Danmark A/S, it has been and remains an immense logistical challenge to deliver the PASCHAL products and then take them away again.
PASCHAL's regular customer, NCC, headquartered at Herrjärva torg 4, 170 80 Solna, Sweden, is supported continuously by the technical department and the formwork adviser with shuttering and dismantling drawings, calculations and cost estimates, and they are extremely satisfied with both the materials and the services that PASCHAL-Danmark A/S provides. According to the current construction schedule, PASCHAL-Danmark A/S will provide formwork, scaffolding material and additional logistical and technical support until the middle of 2022.
The "Alnarp" road and railway overpass roughly in the middle of the stretch of track from Malmö to Lund is one example of the wide variety of applications in which the LOGO.3 wall formwork is used in the railway megaproject. 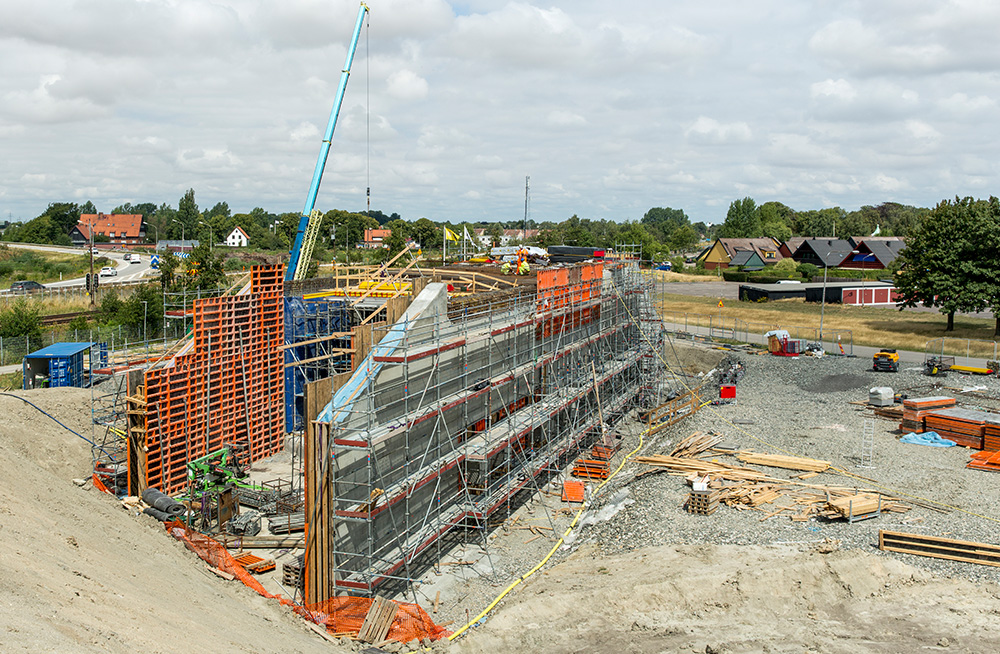 The bridge structures were formed at a safe distance with the LOGO.3 wall formwork system and then moved into their final position after completion.

Everything completed in just 12 days, instead of 18 days

The E6 was closed at the Alnarp junction at 1 am on 13 May 2021. The road was reopened just over 12 days later. In that time, the existing bridges had been demolished and torn down. At the same time, the new reinforced concrete bridge structure was built at a safe distance. The prefabricated reinforced concrete bridge structures were then slid into place on prepared foundations using previously positioned rails.
NCC used the LOGO.3 wall formwork system, including connecting pieces and adjustable props, for the formwork for the vertical reinforced concrete structures.
The vertical reinforced concrete structures are more than 10 metres high and the double-faced formwork was produced with LOGO.3.
Particularly for the sloping wall endings was the vertical and horizontal element application utile and supported the rapid shuttering and stripping times,
as well as the quick, simple and secure element connection using a light wedge clamp, which weighs only 1.8 kg each. All in all, there were significant advantages in reducing the shuttering and dismantling times and contributed significantly to the short construction time. The construction company and the customer are highly satisfied with the overall result.
The work that was initially estimated to take 18 days was completed in 12 days.

The practical and balanced sorting of elements are a guarantee for universal use. The profiled flat steel frame guarantees durability and robustness, which is why just a few tie-points (0.62 tie-points / m²) are sufficient and reduce shuttering and stripping times. The height of the formwork is only 12 cm. This means that it is not "bulky" either when used on the construction site or during transport and storage.
The plywood panels are made of a12-ply, 16mm thick Finnish birch plywood.
The permitted fresh concrete pressure is 70 kN/m² in accordance with DIN 18218 and this is entirely sufficient, as is demonstrated by the impressive examples of applications all over the world.
The LOGO.3 formwork system is fully compatible with all system components of the LOGO series and is suitable for a very wide range of formwork tasks in civil engineering, industrial and container construction as well as residential and multi-storey construction.