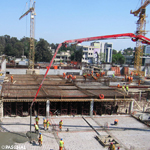 New construction of campus of medical faculty in Algiers

RASTER modular formwork for a place of study for 10,000 medical students

The various locations of the medical faculty of the University of Algiers are distributed throughout the metropolitan area of Algiers and need to be consolidated. But in a city with over a million inhabitants, where does one finda suitable campus, and how does one overcome the enormous problem of not constantly putting off this project of the century, but simply build it?

A university campus demands a lot of room as well as connections to existing traffic systems and power supplies. Very close to the old town, in Bouzarea district, Ben Aknoun quarter, there was a 15 hectare area that was flanked by two main roads (RN 36 and 41), and which lay idle. The office of public provisions (Direction des équipements publics) declared that this was the perfect place to locate the university campus. The national importance of this can not be overestimated.
The old owners were bought out, old buildings torn down, the poorly sustainable ground extensively improved. The company COSIDER-Construction (Dar El Beida, Algiers) was commissioned with the realisation of the project. COSIDER is a market-leading construction company in Algeria with 40 offices and 10 production locations. 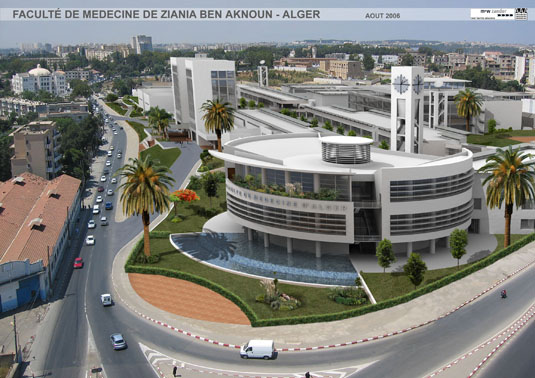 6,000 medical students, 2,000 student dentists and 2,000 pharmacology students are to be taught on the campus. In addition to the teaching buildings, an administration centre, a library and a canteen are also needed. Additionally there should be 400 underground parking spaces.
The construction site covers an area of around 61,000 square metres and is divided into five construction stages:

In total there are more than 350,000 square metres of formwork surfaces to be finished. 57,500 m³ of concrete and 7,820 tons of reinforced steel will be processed by the end.
The management of the contracting company decided to use Modular formwork by PASCHAL. This was to be applied to the girders; 1,500 m² of material were used. For flooring formwork, PASCHAL Deck was used; 3,500 m² of material put to use.
Supervision and consulting for the project came from the PASCHAL representative office in Algiers. The manager is Monsieur Toufik Hamadache.

The Modular/GE Universal Formwork Module has earned its name well, as it has been proven to be flexible and versatile in over 40 countries in a variety of construction sites, whether for foundations, walls, shafts, polygonal structures, columns or beams.
Work with Modular formwork has shown to be quicker and simpler than with any other product. The stable steel frame is simple to clean and handle.
At the construction site, the advantages of Modular formwork soon became known.  Originally intended only for the beams, it was quickly chosen for wall formwork and was even showing its capabilities as polygonal structure formwork in the Rotunda. This was also down to the good training of the Algerian skilled personnel through the PASCHAL consultants and fitters.
The various height differences in the floors and the beams that lay between them and concrete columns and the formwork task somewhat more challenging. The concrete picture satisfied with international standards.
The manager of the formwork operations calculated a total of 973,000 man hours for formwork and 413,000 for reinforcing; in addition to 100,000 hours of concrete work.

... is a simple, robust slab formwork system with the fewest possible different parts. It is based on slabs, which are held on overlapping H20 beams by crossing trusses as well conventional struts.
The training time for this system is minimal, the results lived up to the high expectations. 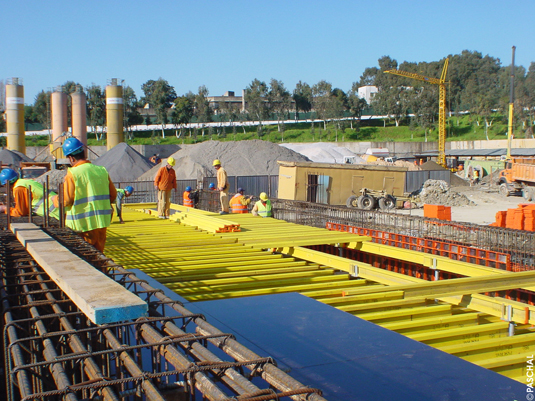 Two bulldozers, two crushers, two bucket excavators, two wheeled loaders and ten dumper trucks were used during the initial construction work.
The concrete was mixed in the site's own facility. Cement was delivered by six transporters. There were constantly six concrete mixers and one concrete pump per truck on site.
Eight fixed cranes and two mobile cranes ensured that the construction material got to where it was needed, from wherever it may have been. 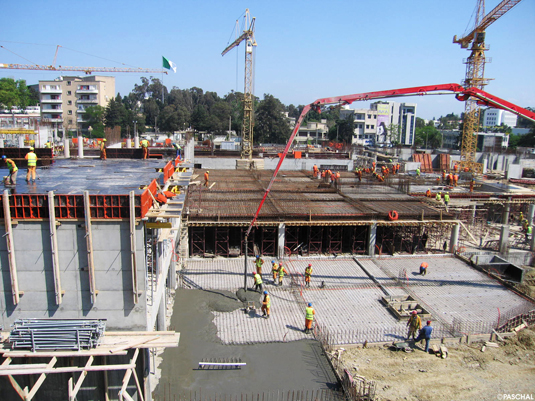