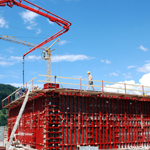 Tools instead of Strawberries

Extension of a Production Hall with Office building

A strawberry field had to make way when a production hall plus office building was erected by the Josef Singler Construction Company of Hofstetten / Germany. The awarding authority was Benz Werkzeugsysteme GmbH [Tool Systems] of (Haslach) – a subsidiary of the Zimmer Group (Rheinau) which also produces precision tools for CNC-devices.

The hall’s extensions cover a ground surface of 3.500 m². As a first step strip foundations were laid, then the walls were erected and then the flat roof was spanned. A 1.000 m³ concrete plate made of C25-30 WU-Concrete that formed the subgrade was built later.
Next, the floor was covered with a heavy-duty coating and the hall was ready to be handed over to the customer after only four months of construction.
>The hall is fitted with shear walls and glass and therefore looks quite impressive, especially when viewed from the South and from the West.

The hall’s walls and the stair and elevator shafts are 8.35 metres high and 30 to 25 centimetres thick. The adjoining office building with an area of
800-m² is two storeys in height.
The form work extended right up to this height and the concrete pouring was carried out in one single cast. The architect had specified exposed concrete surfaces in the hall’s Interior; the hall’s exterior was fitted with an insulation layer of 12 centimetres which was applied directly to the system formwork on which it remained after hardening.
The view side, which is the “road” side, facing south, is partially glazed. The supporting columns were arranged in a staggered fashion with 7 off-sets and 6 niches. A stiffening strip was built at the ceiling at a height of 6.80 metres. All this made the formwork quite complicated. A total of 250 tons of reinforcing steel was processed.
17 cylindrical columns made of cardboard, dia. 300 mm and each 6.90 metres high, were supposed to carry the load of the roof. However, the single-cast method planned originally would have led to the cardboard tubes bursting one after another as the pressure of the liquid concrete proved to be too high!

According to site’s supervisor, the LOGO.3 wall formwork is the “Optimum Solution“ for this sophisticated construction project.

One set of form work comprised three LOGO.3 panels, each 2.70 m high, lying on top of each other, plus an extension panel, 60 centimetres high: The resulting formwork therefore totalled 8.70 m.
As the wall panels were staggered, two halves of wall formwork material had to be prepared.
Thanks to a well-planned sequence of process steps the total area of the formwork could be limited to a mere 400 m². The LOGO.3 panels together with all other formwork was supplied by PASCHAL-Werk G. Maier GmbH of Steinach / Germany. 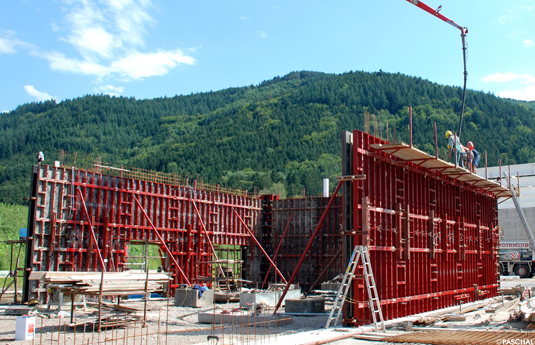 Three PILO-steel columns proved to be the solution for the problem with the cylindrical columns. They enclosed the cardboard columns safely so that the columns could therefore be completed within a short period of time.
Foundation work together with small concrete tasks was completed by Josef Singler Constructions, deploying his proprietary “MODULAR-Universal” Formwork.
Master mason Albert Schaetzle, Josef Singler’s sitesupervisor praised the competent support provided by the PASCHAL consultants and technicians and emphasized the locational advantage provided by this contractor. Commenting on the easy handling he simply stated:
“This Formwork technology is top-class, I wouldn’t want to work without it”.