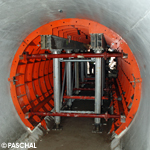 Tunnel renovations under the motorway

In the forests of Haudiomont, not far from Verdun, for many kilometres the A4 runs along the top of an embankment. Along the way many tube shaped openings for wild animals and pedestrians go through it on the ground level. Here the ground is horizontal. The concrete shell in three of these culverts had begun to crumble. But instead of completely replacing the tubes (which would have meant blocking the motorway for weeks) the operating company, SANEF (Société des autoroutes du Nord et de l’Est de la France – motorway company for North and East France, Issy-les-Moulineaux) decided to reinforce them with a new concrete lining. This special job was awarded to berthold s.a. (Dieue sur Meuse).

Light at the end of the tunnel

With a diameter of only 2.25 metres and a cross section roughly resembling a horseshoe, not only did the required tunnel formwork have to be dimensionally stable, but it also had to allow the passage of people and equipment. Many methods were tried out, including the company’s own formwork made of plastic, and special solutions made of timber, but all these proved to be either not strong enough or impractical for a diameter in this range.

A special formwork from PASCHAL, which was light but strong enough and still left enough space, turned out to be the ideal solution.. 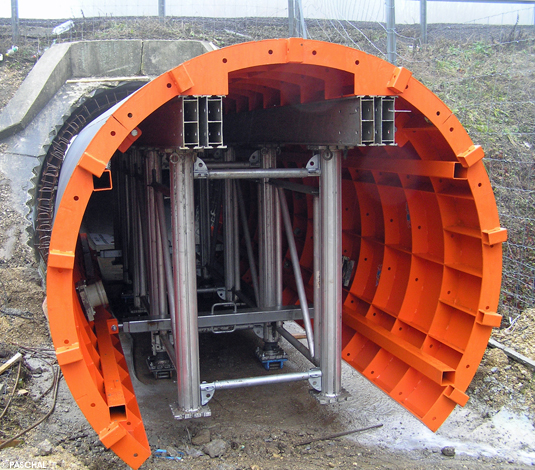 After the formwork has been assembled in front of the tunnel it is moved into it. Load rollers are fastened under the GASS shoring system, which turns it into a formwork carriage.

With its beginnings as a metal processing company, the Baden formwork manufacturer and service provider PASCHAL has more than 30 years of experience in the manufacture of special formwork made of steel.
In order to determine the most efficient method of formwork, employees of the PASCHAL construction department inspected the local situation and construction conditions. As a result a proposal was made for special formwork with the smallest number of individual components. Only three arched elements with a length of 3.00 m each make up the full perimeter to be formed. Two of these units then form the full length of the formwork of 6.00 m. 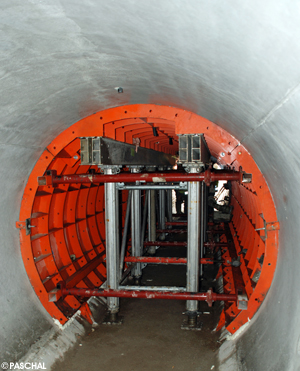 After this proposal was accepted by the construction company doing the work there were only four weeks left between the time the job was awarded and the delivery deadline.
The construction height of the full formwork for the arch with its diameter of 2.25 m was only 10 cm. All the individual components are initially assembled outside of the tubes to be renovated, supported with parts of the shoring system GASS, and then made movable. The entire 6.00 m long unit can be moved in steps as the construction work proceeds, after being reduced in height and width by a folding mechanism. A total of up to eight phases are required for the formwork and the placing of concrete in each tube.
The load from the upper arch area was transferred by the aluminium shoring system GASS, which had a great opportunity to demonstrate its strengths – lightweight and easy to handle, but still can be quickly assembled and taken down. Transverse pressure props bore the horizontal loads. Between these components, which were kept to an absolute minimum, workers still had enough space to move from one end of the formwork to the other without any difficulty.
After a brief introductory training phase the formwork was later moved in a daily cycle. The concrete was laid using a concrete pump.

The site foreman Benoit Raspado was very satisfied: “Not only is this ingenious special formwork faster, but in terms of the time available for construction, it is considerably more economical than any other standard formwork product, since it will now be used for other culverts. There is simply no better solution!” 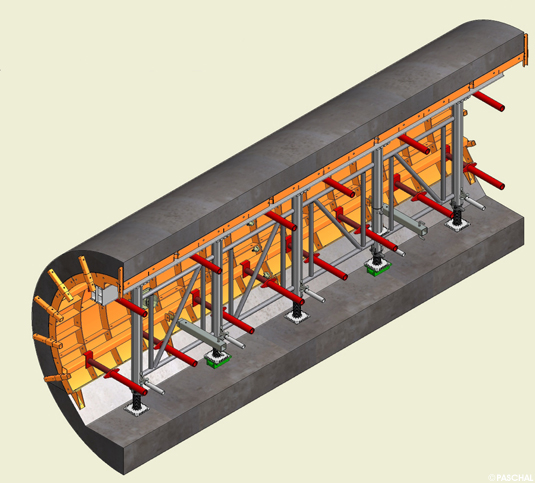 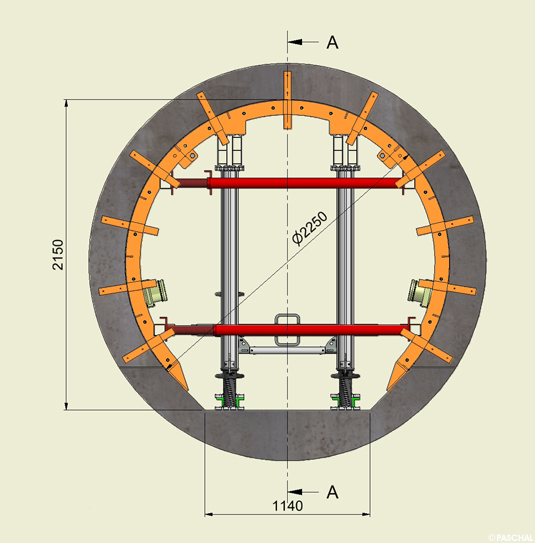 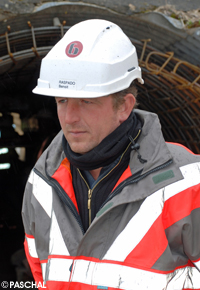 „Not only is this ingenious special formwork faster, but in terms of the time available for construction, it is considerably more economical than any other standard formwork product, since it will now be used for other culverts. There is simply no better solution!“