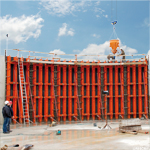 The private power station that pays for itself

Producing electricity from biomethane is one of the most environmentally friendly methods of energy generation. The German Renewable Energy Law (EEG) offers plant operators guaranteed protection of their investments for 20 years. In Lower Saxony, a large number of agricultural companies already use this form of support since newly built Small Power Plants pay for themselves within only a few years. One of the latest and most efficient plants was commissioned at the beginning of February 2011.

Contractor G. Büter Bauunternehmen GmbH & Co. KG (Ringe) was commissioned to complete the shell construction of a private biomethane plant within only a few weeks during September and October 2010. This comprised a technical building, storage tank and three circular tanks built of on-site concrete: a fermenter (diameter 21 metres), post-fermenter (24 m) and fermentation residue tank (32 m). Each of the tanks is 6.00 metres high with a consistent wall thickness of 20 cm.

Gravel, sand and turf were initially excavated for the surface foundation, which required open water management because the local groundwater level is only 1 m below surface.

C35/45 concrete was used for the base plate.

Still in stock, pre-rounded and assembled from the last bio-gas plant contract, the circular formwork could be positioned immediately arriving on site. The heavy-duty crane at the centre of the construction site was used during the construction of all buildings. 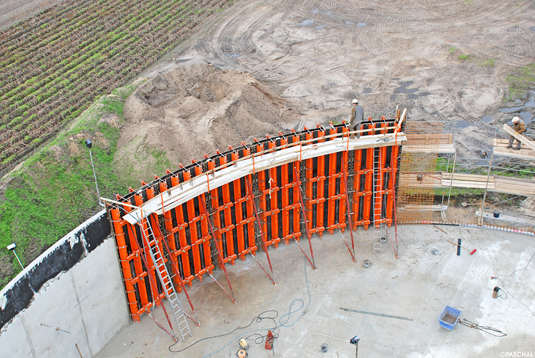 Each phase had an outer length of 14.40 metres and an inner length of 13.80 metres. The phases involve setting up one side of the formwork, reinforcement work, erecting the closing formwork (including installation of a 1.0-metre high PEHD support fabric in the upper area to protect the concrete from the corrosive bio-gas), concreting and finally dismantling, cleaning and repositioning the formwork. These work steps can often be a laborious process when other types of formwork are used. But TTR enabled the phase to be completed quickly and easily, especially since it eliminates readjustments or additional on-site fillers. TTR proved its outstanding construction site characteristics by enabling one full phase to be completed every day. Based on his professional experience, Dipl.-Ing. Arndt Kuipers, site manager for Büter-Bau, is convinced that "no other circular formwork offers this quality!" Eliminating tie rods in the upper areas, tie rod guides have been put on top instead. This reduced work time and material costs and improved the quality of the concrete surface. Only 170 m² of circular formwork was used for a total formed surface of approx. 2.000 m². Büter owns two 14.40 m formwork sets and rented another two sets.
A total of 4 travelling formwork crews are assigned to build bio-gas plants throughout north-western Germany. 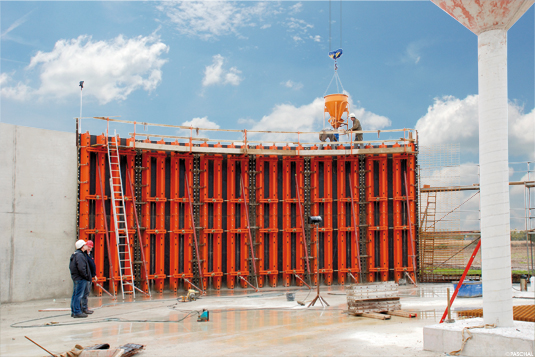 TTR formwork has a 21-mm thick skin of 15-layer Finnish birch plywood, suitable for nailing. It is the only system which can be flexibly curved to a radius of 2.5 metres. Other formwork skins of similar thickness would break or crimp if curved to such a tight radius. 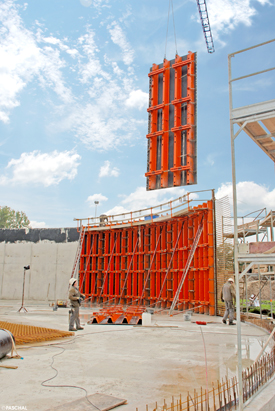 The TRAPEZOIDAL GIRDER formwork with adjustable radius (TTR) is used by Büter specifically for the construction of bio-gas plants.
The TTR has a 21-mm thick, 15-layer skin of nailable Finnish birch plywood and is the only system which can be flexibly curved to a radius of 2.5 metres, since other plywood would break or crimp if bent to such a tight radius. In the form of a so-called "two-girder segment" (i.e. a segment with two longitudinal girders), it can even be bent to radii as tight as 1 metre with an 18-mm plywood. Even then, the formwork remains stable, completely round and accurately configured and does not warp even after repeated repositioning. The circumference can be formed within one centimetre of accuracy without extra on-site filler adjustments. The formwork surface absorbs up to 60 kN of fresh concrete pressure per square metre, although it has only 0.28 ties per square metre in some cases. These same advantages, which prove their worth especially in challenging technical construction as well as in high-quality architecture, were relied on to form this round tank. Due to the fast forming procedures, the particularly low number of ties, the fact that the adjusted radii did not require correction and the formwork did not have to be supported with bracings, all the work was easily and securely completed in the shortest time possible and therefore as efficiently as possible according to the best known method. The low number of ties also increased the quality of the concrete surface.

Arndt Kuipers also praises the outstanding service by PASCHAL and is generally highly satisfied. "Our decision to buy TTR was spot on. We will certainly choose TTR again next time!"

The shell has meanwhile been successfully completed on schedule. The plant was commissioned at the beginning of February 2011 and now supplies power from a compact generator driven by a marine engine. The waste heat by-product is used to heat the building. The electricity meter is now running backwards. Fast backwards!