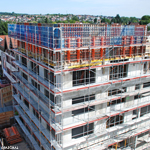 Many a modern building is planned in a way that exceeds the limits of conventional construction techniques or the load-bearing capacities of standard construction materials.
Balanced overall-designs which apply the expertise of all participating parties, including formwork planners, help in meeting these requirements and keep additional costs within limits.

The upcoming town of Wilferdingen lies between the cities of Karlsruhe and Pforzheim. A bank building was designated for large building extensions. As in previous years, the Denning Construction company received the order for this job, the same firm that erected the original building back in 1989.

Excavation work lasted from February to March 2011. Excavation extended to a depth of 4.0 meters. Difficult soil conditions and the high level of ground water made things difficult.
8 wells had to be built as drainage shafts and 25 geo-thermal drill shafts totalling 2.900 meters in length were sunk. The latter are used in the all-year-round air-conditioning of the building structure while the former serve as a means of keeping soil-sealing expenses down.

Shell construction work was carried out from April to August 2011 . Despite the outer inconspicuous architectural structure of the building, there were considerable static and technical demands which could not have been solved with traditional methods of construction. To meet this challenge it was necessary to create a sophisticated overall concept.

Large parts of the building have a sub-basement allowing the construction of a 0.6 meter thick base plate plus thermal insulation. The remainder was shored up with strip foundations including thermal insulation.
The company owned Modular Universal Formwork was used for the retraction work on the foundations which used 1.700 cubic meters of concrete C30/37 and 260 tons of steel (70 % round steel bars, 30 % reinforcement meshes). The basement lies at ground water level and was constructed as a water-proofed concrete tank. 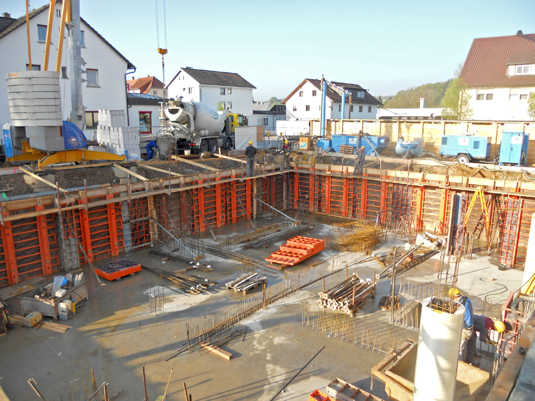 The basement wall is constructed with Modular/GE elements 2.50 metres high.
A total of 40 of these elements have been deployed on this site. photo © Dennig Constructions

The next step was constructing the ground floor plus three upper floors. The ground floor was built as an extensive service counter area and structural elements were dispensed with for the major part. 60 circular concrete columns carry most of the structural load. The upper floors, and especially the top-most one are subjected to considerable tensional forces and the armouring in this area is accordingly strong. The most severe strains occur between the partly cantilevered façade and the building's roof. The height between floors which varies between 3.00 and 3.50 meters exacerbates the problems of tensile forces. The junctions between the walls and the slabs are therefore fitted with multiple bolt connectors.

This method of construction, whereby the walls and the slabs are designed to jointly form a load-bearing structure, is fairly unusual for an office building because it is quite intricate and costly. 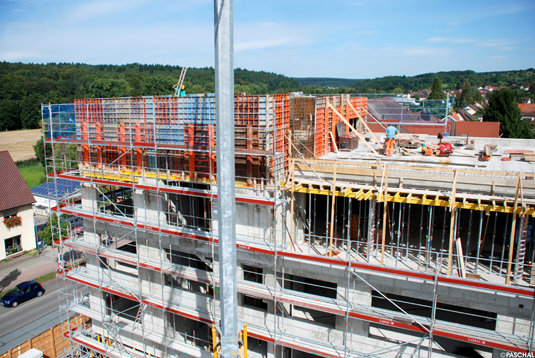 Very complex structural tasks had to be completed above the rooftops of Wilferdingen.

The floors also contain small sections that need to be formed, measuring a few decimetres: Examples are wall projections and stair wells. Using large-size elements would prove uneconomical. For constructional reasons the relevant areas that are statically critical had to be cast in one go and without any joints. For the same reasons large-scale forming sections had to be chosen. 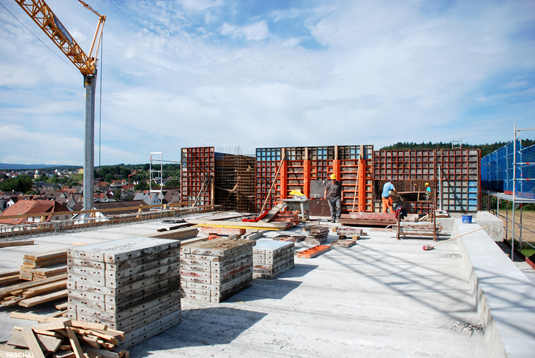 The roof's technical area coincides constructively with the greatest static loads.
This necessitated the introduction of seamless construction methods combined with bolted connections.

Combining large-size with small system-elements is a specialty of PASCHAL, the formwork manufacturer. PASCHAL'S wall formwork can be adjusted to the construction site with a tolerance of 1.0 cm. The Wilhelm Dennig Construction Company decided to use the Modular/GE System.

Apart from the company owned formwork there are also own scaffoldings available which can be flexibly adjusted to changing job sizes.

"The Modular/GE has clearly proved its strength and suitability", is the conviction of master mason, site manager and company boss Hans-Peter Dennig.

Modular/GE Universal Formwork has justly earned its reputation. In more than 40 countries this formwork system has demonstrated its versatility and flexibility on the most diverse construction sites, whether for foundation work, walls, shafts, polygonal parts, columns or beams.
Working with Modular has been shown to be faster and simpler than with other products. The stable flat-steel frame is easy to clean and easy to handle.
Modular is one of the most popular, most versatile and most widely used systems formwork globally.
The versatile range of small form-work elements is supplemented by the GE series of large elements with a maximum width of 2.0 meters  and a maximum height of 2.50 meters. The elements can withstand a maximum pressure of 60 kN/sqm from freshly poured concrete. 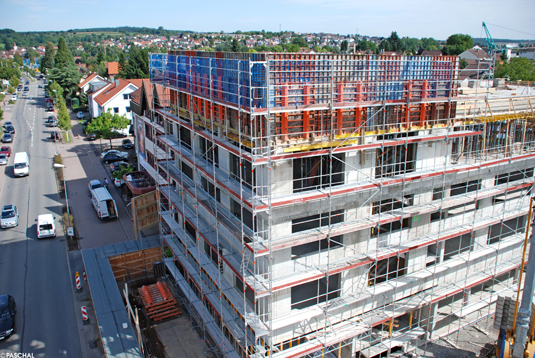 The five storeyed, technically complex bank building was erected with the use of Modular/GE.

One noteworthy point about this building site is the fact that the Modular/GE had already been used for the construction of the bank building in the year 1989 - exactly the same 20 large-size elements had been deployed then - now they are used on the current section. In the meantime they received regular renovations and were equipped and fitted with new surfaces: So they still render a valuable service − today with 20 new and extra GE elements.

The GE has accumulated 23 years of work and there is no end in sight yet. The investment in a quality brand has more than paid off.
"The Modular/GE is a tremendously good construction, it is very economical and we are very happy with it" says Hans-Peter Danner.

In the meantime shell work has been completed, followed by internal finishing work and by relocation. The existing ridge roof is to be removed and replaced by a green-area flat roof. All work is expected to have been completed in the autumn of 2012. 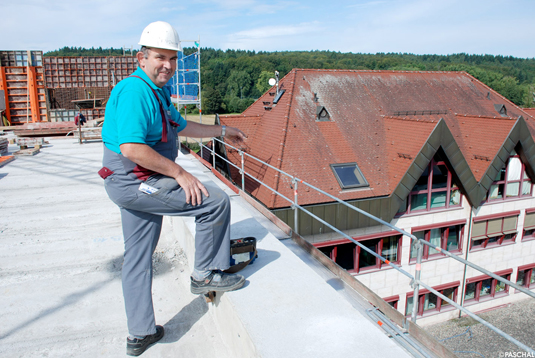