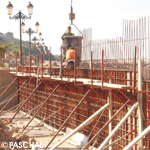 651 metres of coastal protection in Algeria.

In EL KALA, in the EL TAREF Province of Algeria, a reinforced concrete protection wall has been built, extending up to a height of 8.00 metres, to protect the 651-metre-long promenade. 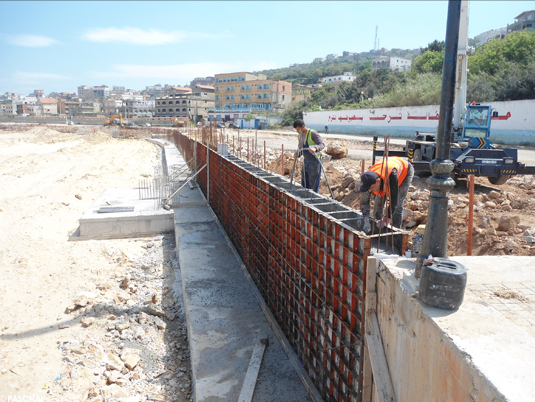 Between March and December 2014, a 651-metre-long concrete protection wall was constructed in EL KALA in the EL TAREF Province of Algeria, involving the use of 400 m² of Modular/GE formwork.
In the adjoining area to the existing concrete structure, Modular/GE panels measuring 100 x 150 cm were combined with 100 x 125 cm panels as the formwork for the protective wall.

The construction company that carried out this work, Eurl ETUHP MENANI ALGERIE used its own formwork system, the PASCHAL Modular/GE universal formwork. For this project, 400 square metres of Modular formwork was used, primarily in panel heights of 100 and 125 cm.

The total construction costs were given as € 3.5 million. Parallel to construction of this protective reinforced concrete wall, the promenade was restored, together with the pipework laid below it.

Foundations that run deep, instead of being built on sand

The foundations of part of this reinforced concrete protective wall take the form of 430 drilled piles with diameters of 60 and 80 cm and a depth of up to 12 metres. A concrete foundation was then poured over the heads of these drilled piles to a width of up to 4.00 metres and a thickness of up to 0.80 metres. Universal Modular/GE formwork was also used on the strip foundations.
The entire strip foundation was built in 54 sections, each 12 metres in length.

The construction of this protection wall is divided into one wall section measuring 651 metres in length, built with a wall thickness of 0.40 to 0.60 cm and to different heights, ranging from 2.60 metres to 8.00 metres, without additional cross bracing.
168 metres of this protective wall construction was clad on the seaward side with reinforcing wall panels arranged transversely at a distance of 4.00 metres.
The concrete constructions attaining a wall height of 8.00 metres were each built in two concreting cycles, each to a height of 4.00 metres.
The transverse reinforcement, with a thickness of 0.70 metres, ends at any one time at a height of 4.00 metres. Also the inclined reinforcement sections were formed using universal Modular/GE formwork.
Across the entire length of this construction, the seaward side was left as a visibly concrete structure.

The Modular/GE designed for manual handling and universal formwork also delivered conviction at this construction project in Algeria, by virtue of its versatility and adaptability, using as formwork for the foundations as well as the wall structures, which in turn documents that concrete structures can be built perfectly at low cost and within a short period of time.
This was also ably assisted through the technical support provided by the PASCHAL representative office 'Bureau de Liaison Algérie' 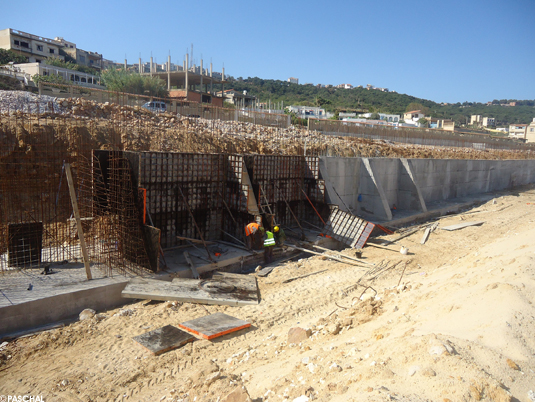 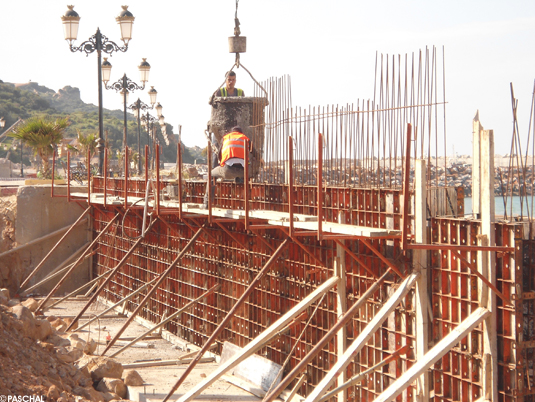 The Modular/GE formwork from PASCHAL proved its flexibility and ease of use once again in Algeria. In the first section, the concrete wall, measuring 40 to 60 cm in thickness, was concreted to a height of 4.00 metres. In the second cycle, the wall was then completed to a height of 8.00 metres.