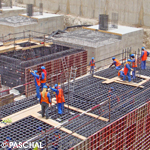 Modular/GE universal formwork for 1,860 foundations for the new midfield terminal

The business and tourism location Abu Dhabi is to be enlarged significantly until 2030. This also includes the drastic expansion of the Abu Dhabi International Airport. The “Midfield Terminal Complex” lies, as the name suggests, between two runways. It is to reach a capacity of 27 to 40 million passengers per year. The terminal will be between 630,000 m² and 702,000 m² in size; in addition there will be approx. 800,000 m² of other buildings including customs clearance for freight machines.

In June 2012, the contract to build a modern airport building was signed between the Abu Dhabi Airports Company and a joint venture comprising the companies TAV, CCC and Arabtec (Abu Dhabi). The contract has a volume of 10.8 billion AED (approx. 2.2 billion Euros). The grand opening is expected to take place in 2017.

The construction period is to be four years followed by a nine-month test phase. There will be in total 65 piers for airplanes, even for the large Airbus A-380.

The airport is situated at a linear distance of about seven kilometres from the city centre of Abu Dhabi.
The earthwork on the area of approx. 15 km² began back in 2010. It mainly comprises quaternary, Aeolian sands which are not sustainable; With 8 m below the upper edge the ground-water level is at an unproblematic depth for construction work. 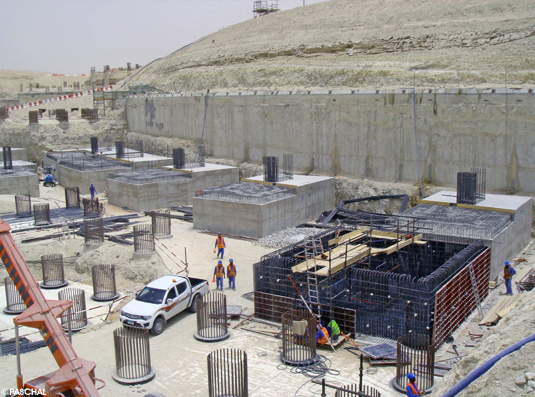 After the formwork had been put together for a kind of foundation, individual elements remained to become larger units. This way, they could be dismantled, cleaned and moved faster.

Basis of the entire architecture: The foundations

During the first phase of construction, everything is prepared for the visible building parts to be erected. This includes excavating earth, improving and densifying it and above all, an almost immense number of foundations – there are 1,860 of them!

Practically all foundations are deep foundations with auger piles from 60 to 100 cm in diameter and up to 25 m depth. The “heads” of these piles are cement blocks in various shapes and sizes of several metres in height, width and depth. One pile head usually spans 2-10 ends of the auger piles and can be up to 22 m long.

The construction period for the pile heads was scheduled for 10 months; problems in this important area would have delayed the entire construction and would have increased the costs.
In effect, this work was carried out in only 8 months. How was that possible? 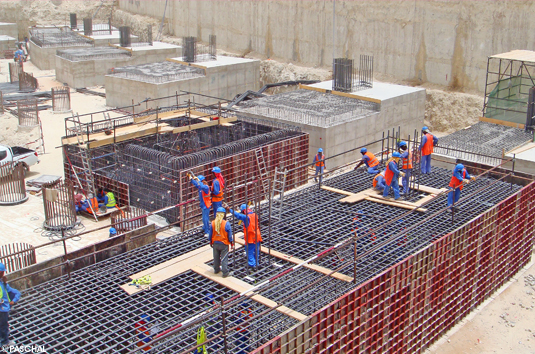 Construction of a large foundation: Apart from foundations with only a few meters of length, there were also very large ones shuttered. They used the foundation formwork/GE universal formwork by PASCHAL.

PASCHAL Concrete Forms Co. W.L.L. (Bahrain) supplied the Modular/GE universal formwork to manufacture the 1,500 pile heads. Also the formwork plans were created there.
The construction site teams were instructed in the easy operation of the cement formwork on site.

Although the formwork can be adapted to the necessary architecture down to the last centimetre, 5-cm steps were adequate for the foundations. In this way, the formwork for 16 different types of foundations (whereby the width, length, height and angle could be different) could be set up without any problems.
There was no need to even out remaining measurements.

The Modular formwork has a 15 mm thick 11-layer formwork made of sustainable cultivated Finnish beech plywood facing that can be nailed. The frame comprises a robust high quality steel mesh frame which is very easy to clean and repair. The light weight of the individual elements was suitable for the manual placing of the Modular formwork because a mobile crane was not always available. 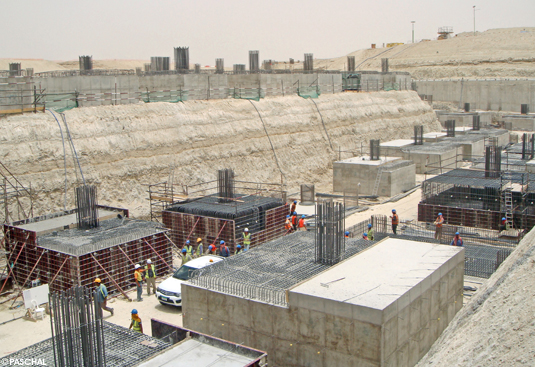 Deep trenches in the ground suggest basements. Three sets of formworks show the work on the foundations at different stages.